Kagai is a district which you can engage a geisya.

Furu-machi Kagai is located on Chuo ward in city of Niigata.

In addition, a lot of old building which was built before the WWⅡ remain in this area.

There are registered national cultural properties such as Nabedyaya and Ikinariya which are biggest traditional restaurants with longest history and high class. 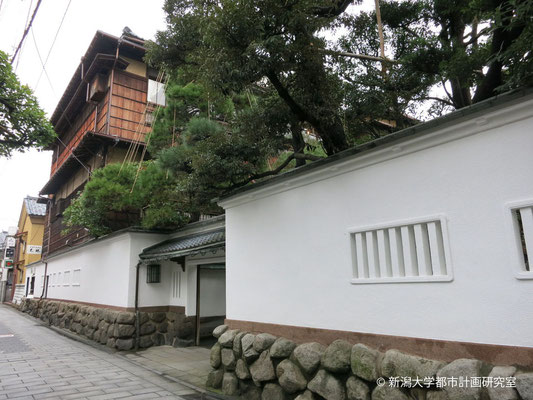 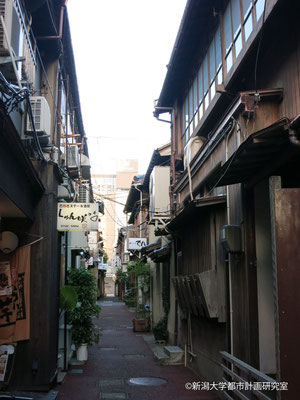 Iwamuro area is located on Nishikan ward in city of Niigata.

The Iwamuro Onsen Hot-spring Spa has over 300 years of history.

Moreover, it was almost a post town of the old Hokkoku Highway.

Takashimaya is a Japanese inn with hot-spring which has over 250 years of history. It is registered national cultural properties. 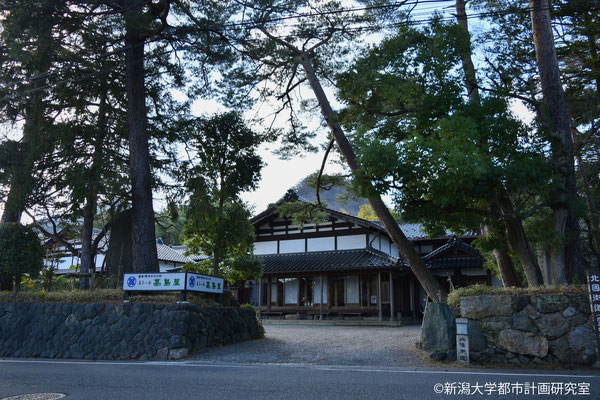 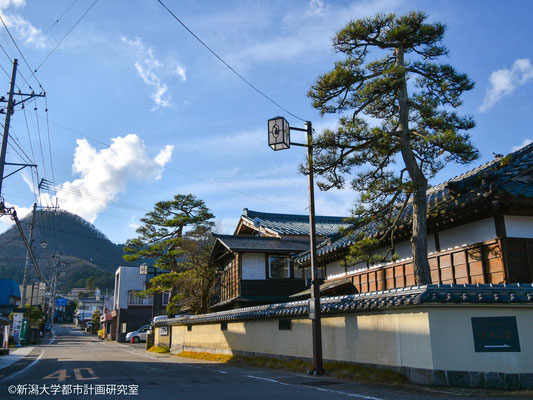 The “Shimomachi on Niigata City” area is located in the mouth of “Shinano river”.

A lot of old houses remained there.

It is designated as a national cultural property. 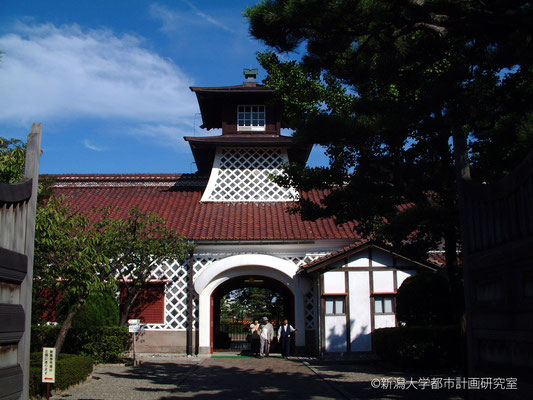 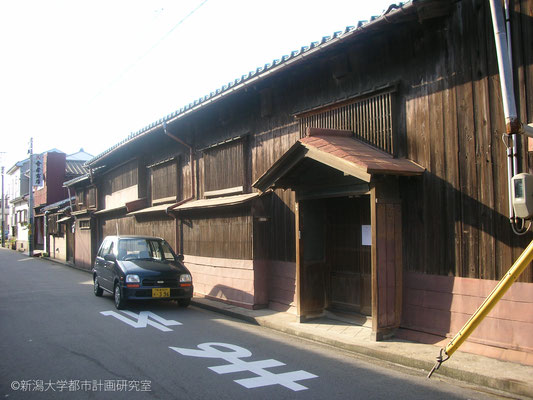 Ogi is located on Ogi Peninsula of Sado.

It is the port town that prospered as an outport of a gold mine in the Edo era.

Many houses in the town form a line.

The wooden 4-story &quot;Kihachi-ya Inn&quot; is designated as a registered national cultural property. 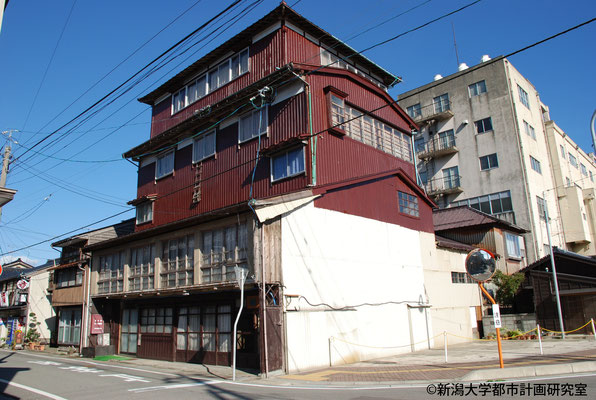 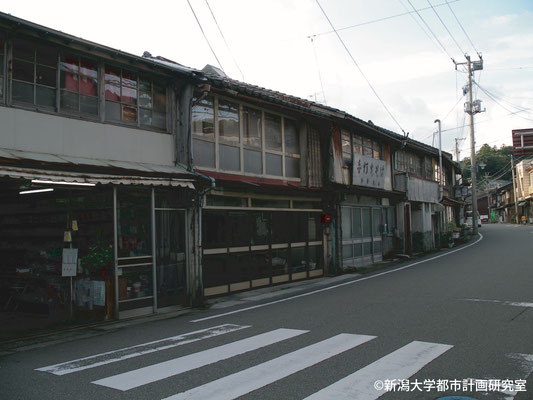 ”Shukunegi” is the village which developed as anchorage site way port.

It is located in the inlet of the Ogi shore.

It ran early in the Meiji era from last part of Edo era and greeted the heyday.

The boarded wall houses crowd in the alley.

The cityscape of Shukunegi was created by the ship’s carpenters.

The cityscape is designated as a Important Preservation Districts for Groups of historic building of the country. 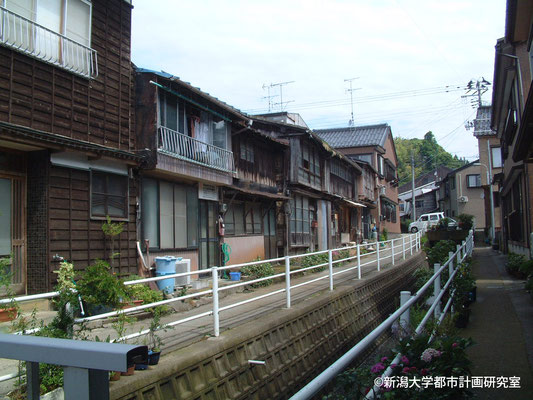 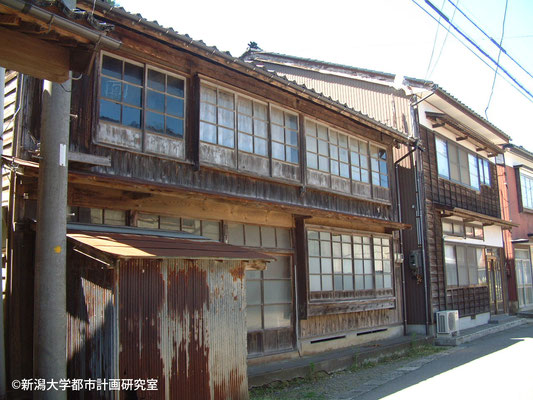 Akadomari in Sado city is a port town which last from the middle ages.

Akadomari is a historic district.

Historic houses stand for approximately 1.5km along the Akadomari Street.

In addition, there is a famous brewery. Akadomari origin sake called Hokusetsu is exported to the world.

Aikawa in Sado city prospered by development of Sado Gold Mine.

Aikawa magistrate's office was established in the Edo era and Aikawa became the administrative center of Sado.

Sado Gold Mine is designated as the national historic sites.

Aikawa is designated as the national cultural landscape.

In addition, world heritage registration is pushed forward in Aikawa.

Nishi-Ohata used to be a neighborhood mainly consisted of farming fields in the Edo era.

The neighborhood was developed as housing area for rich people since the Meiji era.

An example of the semi-foreign style buildings, there is the old Niigata Prefecture lieutenant governor official residence, built in 1921.

This building was rehabilitated as a restaurant, leaving the scene of those days.

An example of the Western-style buildings, there is a Niigata Catholic Church.

This building is a cathedral, which is the headquarters of Niigata, Yamagata, and Akita Prefecture.

In addition, there are the old Saito House which is designated as the national scenic beauty, and the Niitsu Memorial Hall which is

Kosudo is a small town which is located in the center of the agricultural areas.

It was flourished as the river port on Shinano river in the Edo era.

The peculiarity of the historic district at Kosudo is Machiya(traditional merchant house) made in the Meiji era that is built in succession at both of the main street.

The old house was a kimono merchant (Fig.).

The central areas of Murakami was established as a castle town in the 17th century.

The building of the castle doesn’t remain, but the stone wall and the outer moat, so forth remain as the heritages.

The site of castle is designated as National historic sites.

Jounenji temple is at Temple district.

Murakami-tai- sai (the traditional festival has continued for about 200 years) is held in July 6th and 7th.